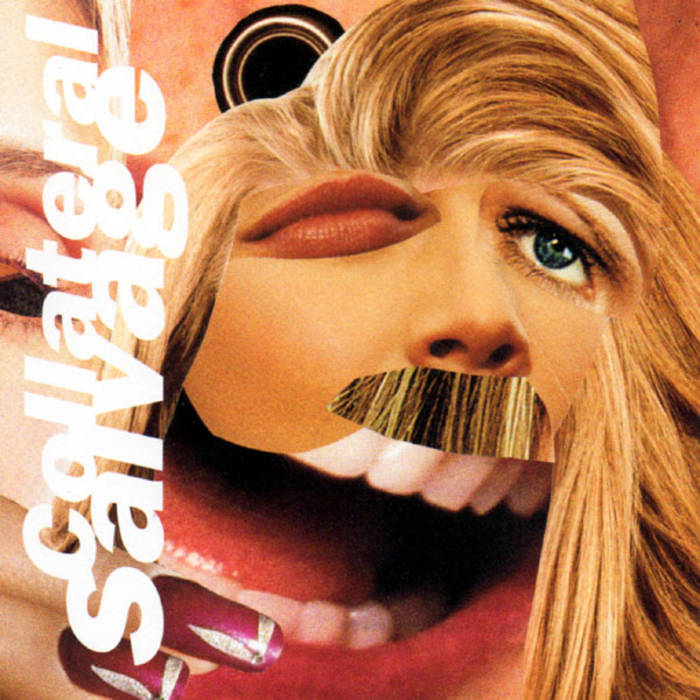 meanoldmiser This is surprisingly playful, and only could have sprung from Nigel Ayers. His touch is impeccably deft and his range is unbounded. It's impossibly fun to listen to this album. Favorite track: Daisycutter.

Okay, well, one, if you've no idea who Nigel Ayers (Nocturnal Emissions) is and yet find yourself wanting to know, go here: www.earthlydelights.co.uk. You'll quickly find that Nigel's been a busy man in his lifetime. If you're new to his discography, god help you and start buying lottery. Nevertheless, starting at Collateral Salvage is as good a place as any, 'cause you gotta start somewhere mate, and this one is candy.

The incorporated electronic and organic elements of Morocco in the dipsy funk and trip of the typical Emissions thoughtsound is exquisite. Granted, the subtext, undercurrent, etc. of Emissions is generally postmodern deconstruction of this, that, and the other thing or post-post modern political rage, it doesn't matter if you're on the bandwagon or even the believe in the bandwagon to be seriously grooved and carried along by the Emissions sound.

The overall feeling of this is serendipitous and tenaciously lighthearted. Don't get the idea that everything Ayers does is as such, 'cause it ain't, but if you're curious about this guy, throw your expectations out the window anyway. Just delve. So, this one shimmers; other works, such as those with Mick Harris or Randy Grief, are completely different. Some bounce, some screech, some wail. If you're curious, spend some time with Nigel Ayers and his catalogue. It's not exceptionally expensive to find his recordings with Emissions (and others) on Ebay and in other places, and then you'll better be able to place the newer recordings in context to the previous work. Plan on thinking a lot about how packaging relates to content, or sound relates to subtext. Or not. The invitation is always there, to explore with Nigel some back alleyways of thought and action, or, to just turn off the old noggin' and follow along with your eyes closed.

This one's beautiful, textural, pleasant; unless you read the song titles and wonder. Wonder, wander, do what you will, these songs are bliss. Even if you don't think you're interested in the music, if you see an Emissions CD in a music store, it's worth checking into Nigel's penchant for cut at paste art and his graphic sensibility. This one's a corker, art-wise.


Nigel Ayers returns in his Nocturnal Emissions guise, decomposing and disarranging who-knows-what sources into the twistedly bright constructions of Collateral Salvage. A hoot!

Drum-thrumming fun begins when Jesus' Twin Brother bounds onto the scene... a blur of beats, jangles and bits of televangelical-speak are wound into a bouncy bop. Burn, Bush, Burn relaxes (albeit a bit surreally) in an islandic vibe where flutes and strums float upon buoyant basslines and pattering rhythms. Groovin' With Mr. Slow marks the first of several occurrences in which Eastern sound forms (here sitar twangs and tweedling reeds) are woven into a magic-carpet of perkiness. Bassy Puchobongo is embedded with start-n-stop musicality looping through a lurching groove, and topped by exotic percussion-play. Seductively gauzy bass struts across a bed of smoldering jungledrums in I See You're With Eeyore while smoky wails of voice and sax writhe in the distance. Weirdly wavering Bunker Buster gradually coalesces into a danceable tapestry, again edged with Middle-Eastern accents. Stirred by spattering beats, muted jangle-rock sways beneath a gauze of pleasantly disorienting esoterica in Resistance Is Fertile , followed by the bouncy ditty of Listen, Little Man. Delicate strings trickle into Running Water, to be pumped up by cool rhythms and Easternish effects... mesmerizing! The brassy warpings of sitar strings meander through the percussive patterns of glowing Lah De La De Saki Ya making for a warm farewell. With 15 peppy (and interestingly arranged) instrumentals, it's easy to get something good out of Collateral Salvage.

Sonic collage-work from Nocturnal Emissions earns a happy A-.

All titles decomposed and disarranged by Nigel Ayers. Cover design by Plazm.